Continuing, a few side notes, if you guys didn’t have the chance to check out our CopyBling that came out this week, we are looking for beta testers of our brand new CopyDoodles site. This is just a screenshot of the site. It’s brand new. It’s going to be really, really cool. It’s going to be really easy to search for stuff. You’ll be able to hover over images and they’ll pop up bigger on the screen, so you can read the taglines on comics clearer, you can see the doodles bigger. It’s going to be really cool. So we’re just looking for a few people to beta test it out. We’re looking for about ten. I have a few already, so the spots are limited, but please email me at Lauren@MikeCapuzzi.com if you are interested.

Then our members-only Lunch and Learn Deal of the Week, Mike is actually flying to Dallas in about an hour to go the Super Conference, so our Lunch and Learn Deal of the Week, I know you guys were asking two weeks ago if we had at the Turbo Charge Your Marketing available. At the time we only had it available if you purchased the Swipe File, but now we do have it available just to purchase the product. Just head over to www.CopyDoodles.com/blog to pick it up and it’s over there.

Let’s just get started with online marketing tips. As you know the replay will be available at www.CopyDoodles.com/blog At the end I will give you a chance to ask some questions and I’ll be answering some questions at the end.

So the first thing, obviously, that you can do with CopyDoodles online is add them to websites. I really like this website from Food For Me, because used our post-it note generator. They wrote a little note and they actually just pasted it in their blog post here. That kind of makes it stand out and look different. It’s just a great way to capture attention. It looks like somebody actually wrote you a short little note, even though you know it’s online, it gets people to call them and order some catering.

I really like this one. This one is for some TeleWhatevers that were being hosted. Gerri-Lynn [assumed spelling] Knight uses these comics a lot in her TeleWhatevers and she says she has a lot better response when she uses them. And it just looks simple, it just looks like she added an image. She doesn’t do anything crazy, so check those out.

I love Michael Carroll’s websites. He always has them bright, fun, and he always uses CopyDoodles. As you can see, he’s got some checkmarks here for bullets, and then he’s also using a CopyDoodle at the very bottom, asking people to call, he obviously used one of the CopyDoodle Generators, then he also puts some arrows there pointing it, and it really stands out, because you’re looking at this page and there’s a lot of color, there’s a lot of things that you want to read and pay attention to, then at the bottom, the thing that you notice the most is that you should call him.

Next this is from Lexington Family Chiropractic. This is just another really great website that I liked, so I pulled it. It’s got a bunch of different CopyDoodles on there, as you can see, just throughout the image, and then in the header the most important part is that it has, “Call us today,” because you want people to read your information and see that, but you want them to call you to make an appointment, or ask questions, or find out more.

This is Ted Nicholas’ site. He is using a ton of CopyDoodles on here. He’s got the stamp on the bottom. He’s got ‘Dazzling Results,’ and this is only a shot of the top of the page, because it’s a really long sales letter page, but there are more CopyDoodles at the bottom, so head over to www.TedNicholas.com in order to see the other CopyDoodles, so you can kind of see what they look like.

Emails are a really great way to use CopyDoodles too. This was an email that’s actually in the Swipe File. It’s one of our success stories. This email was sent out first without any CopyDoodles in it at all, as a free webinar. This was several months or so prior. Then he sent them out as a paid webinar, so people paid to be on this webinar, and he just added some CopyDoodles to it, and he said he got overwhelming response, so many people responded to this email versus the free webinar, more people came to the paid webinar because of the CopyDoodles interaction on there than came to the free webinar, which is pretty cool.

This is also another email sent by Michael Carroll. He’s an insurance agent and he sends this out with new claims, so as you can see he’s just got a few CopyDoodles in there. He has a really great success story too. He said that he was really successful, once he started adding little CopyDoodles in his emails, because before he was just sending this out blank and people weren’t reading it and they weren’t noticing information that was supposed to be sent to them about their insurance policies and about updates and things, but now he gets a lot better response rate, he gets people signing up, because of the CopyDoodles that are added in there. It’s really simple to do this, because all you have to do is type up a basic email and then insert some CopyDoodles as pictures.

Banner ads are a really great way to use CopyDoodles on your websites, or if you’re doing any advertising, whether you’re doing through Google Ads, or you’re doing it on somebody else’s website, or even on your own, just add some CopyDoodles in there. So I pulled two CopyDoodles banner ads that we’ve used, you might have seen them on some of the sites that we have. I pulled some too that customers and CopyDoodles users have sent us. There’s a banner at the bottom that was actually used as a header of a website, and there’s a banner here on the top-left that has a font, it has the underline; it’s simple, but it captures your attention. Compared to all of the other banner ads that are out there this will really stand out, especially if you’re using Google Ads or something and you’re on a site that’s full of ads, yours will definitely stand out to the person that’s looking at it.

Social media, now with the Facebook changes on Facebook pages where you can now have the big header at the top here. There’s really great different ways that you can use CopyDoodles in order to enhance the look of that, because it kind of gets a little fuzzy, the image, on Facebook when you just have text and you’re not supposed to have text, but you don’t want your logo, if it’s just text, so if you play around and use some CopyDoodles on there, as you can see I’m using the notebook paper that I pulled from the CopyNotes section of the site, I’m using some tape that I used from the FunDoodles section, and then obviously an arrow. Then if you can see my little bottom-left, that little computer there, I actually just created that really quickly, that’s also the little icon that comes up every time you post something on the CopyDoodles page and I respond back; things like that. So there’s a lot of different areas that you can use CopyDoodles on social media to capture attention.

You can also use it on your Facebook pages on the welcome page. If you do have a welcome page that’s set up on your site there are some great plug-ins you can use with WordPress in order to do this, if you’re not exactly sure how to set it up on your page. There are some free plug-ins and there are also some paid plug-ins. We use a free one that’s really, really simple to use, if anybody is interested I can probably — just message me on Facebook, or something, on the page and I can send you over the name. But it’s really easy to set up these pages.

Again, I’m using a CopyNote that I just pulled from the FunDoodles section, or the CopyNote generator section of the site. I’ve got stamps on there. We have an opt-in, and this is a really easy way to capture attention and get more leads through Facebook, especially if you’re doing Facebook advertising you can — I know there’s really small images that you can use with Facebook advertising, you can only use like one image and then it’s text, but if you use a small CopyDoodle image, we’ve done this, we get a really great response using a CopyDoodle image as opposed to using a regular image, and then some text, and then people click on that and they link over to your welcome page of your Facebook page and see something like this, they’re more likely to interact and then engage with you.

Then some resources — Web October I did in October 2011, if you guys were not able to catch it, but I did an entire month of just adding CopyDoodles to websites. I did Part 1 and Part 2. So the Part 1 was very basic. Part 2 was a little more advanced, how to use HTML, how to add CopyDoodles into opt-in boxes and things like that. So if you’ve ever been wondering how to use CopyDoodles on your website and you needed the basic tutorial on WordPress, or you wanted to ever pass this to somebody in your office, check those out. The links are at www.CopyDoodles.com/blog, links at the bottom. Send somebody or do it yourself, and watch those, because they’re really basic and really easy.

Then I did CopyDoodles in Social Media, I did two parts to that. So, I did a basic social media — I’m not talking basic like I told you how to sign up for Facebook. I’m talking basic like I showed you different ways you can post things, unique ways you can use CopyDoodles in your social media. Then I also went through Facebook, Twitter, LinkedIn, and things like that.

All of the links are at www.CopyDoodles.com/blog

So there are a ton of resources for you, if you do want to do anything online and you’ve been skeptical or you’ve been hesitant about doing things online because you just don’t know how, or you’re afraid that it’s not going to be easy, and these Lunch and Learns are really basic tutorials that eventually turn into advanced tutorials that will show you how to do everything you need.

So while we’re on hiatus you can check those out. I definitely think you should check them out so that you kind of get a better way of different things that you can do things online. 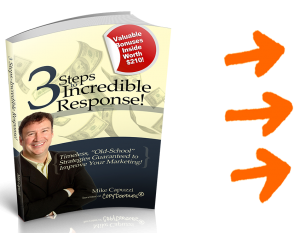 3 Steps to Incredible Response shows you time-tested and proven strategies to connect with your ideal customer in a unique and personal way. Download now!